For the first time in many years, there seems to have been an influx of Aztec Thrushes in Arizona over the last few days, including seven at one location:

Will these birds stick around, or will they leave just before the previously-scheduled BINAC Labor Day trip to Arizona? Who knows, but if I was a betting man, I'd bet against them sticking around. Just my luck, you know?
Posted by Birding is NOT a crime!!!! at 12:28 AM No comments:

The full ABC results are in!!!

Chicago and Cook County got beaten by a bunch of scrubs in Texas, but at least we beat crummy Lake County Illinois and their notorious evil genuis compiler, Walter W. Walters. Enough whining. Here is the e-mail announcing the winners from organizer Phil Pryde of San Diego:

Greetings to all! Here are the official results for the 2006 ABC/C competition! (Sorry about the late posting.)

Congratulations to Los Angeles, Corpus Christi, and all the other winners in the various categories!

It took a while, but we now have all the results from the all the far-flung participants in the 2006 competition for the titles of America’s Birdiest City, and America’s Birdiest County. Here are this springs results, together with hearty congratulations to the 2006 winners in each category.

The overall City winner was Corpus Christi, with a new city record of 247 species (OK, Tex, we’re impressed!); the overall County winner was Los Angeles with 265. Also, special congratulations to the San Antonio folk, who on their first try came in first in two categories. Good work!

A tip of the hat also to the many entrants who combine this competition with a fund-raising effort on behalf of local birding, nature study, or habitat conservation programs; we hope you all were highly successful in those efforts as well. Wherever possible, please try to use your results with the local news media to help promote habitat conservation activities in your local communities.

As most of you already know, this will be the last year that I’ll be coordinating the ABC/C competition. In 2007. the reins will be turned over to the Dauphin Island Bird Sanctuary committee, who have enthusiastically volunteered to carry on the ABC/C in the future. As noted, the contact there is Mike Wilson at Ylhammer1@cs.com. Thanks Mike, and everyone at Dauphin Island.

Congratulations again to all the winners, and thanks to everyone who has participated over the years. I’ve had a grand time working with the competition, and hope you have too.

Very best wishes and good birding, Phil Pryde, San Diego Audubon Society
Posted by Birding is NOT a crime!!!! at 12:48 AM 4 comments:

The actor Paul Newman has been frustrated in an attempt to combine his two favourite occupations - racing fast cars and raising money for charity - by flocks of sharp-shinned hawks, brown thrashers and white-eyed vireos.

He proposed turning Floyd Bennett Field, a disused aerodrome in Brooklyn, New York, into a race track and mounting a "Festival of Speed" every September to raise funds to set up a home for children with terminal illnesses. But his idea of attracting 65,000 motor racing fans to watch him burn round New York's first municipal airfield has been vetoed by armies of twitchers, who say the noise would frighten away rare grassland birds.

Floyd Bennett Field, named after the first man to fly over the North Pole, has long been overtaken by JFK and LaGuardia airports, but as New York's first airport it welcomed many of America's aviation pioneers, among them Amelia Earhart and Howard Hughes, who took off and landed there for his record-breaking flight around the world in 1938.

Pete McCarthy, the North Shore District Ranger who patrols the park, said that soccer, baseball, canoeing, fishing and other sporting events are held on the 1,200 acres of airstrip and 16,000 acres of surrounding parkland, and a $40m sports centre has just opened. "But there is a strict limit of 1,500 people allowed in the park in the summer months and 10,000 in the winter," he said.

However, it was concern from local birdwatchers that led the superintendent of the Gateway National Recreation Area, Barry Sullivan, to tell Newman his grand prix fundraiser would have to find another venue.

"This is such a very special habitat," said E J McAdams, executive director of environmental organisation, the New York Audubon Society. "We wrote a letter to the superintendent saying he should think very carefully before allowing such a thing. There are many rare birds that might be driven away, including the savannah sparrow, the upland sandpiper and the short-eared owl."

Mr Sullivan told the star that his plans were "not compatible with the purposes for which the park was established", but said he would be happy to discuss adapting the disused naval barracks for Newman's Hole in the Wall Gang Camp, which hosts children dying of cancer.
The actor Paul Newman has been frustrated in an attempt to combine his two favourite occupations - racing fast cars and raising money for charity - by flocks of sharp-shinned hawks, brown thrashers and white-eyed vireos.
Posted by Birding is NOT a crime!!!! at 1:35 AM No comments:

Lessons Learned in the North Woods 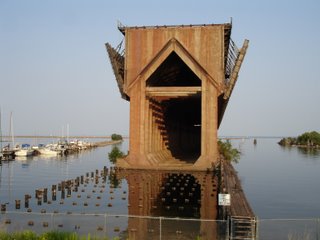 I spent most of last week in the U.P., and today I'm back again in Marquette, Michigan. Wish I had a bit more time to bird, but I'm working, so no Kirtland's Warblers for me on this trip. 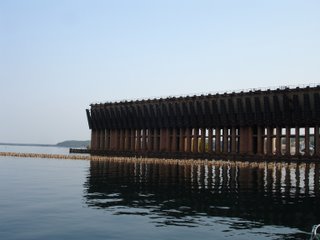 These are two photos of one of the large ore docks that are found in many ports on the upper Great Lakes. This one is right in Marquette, and it had Song Sparrows, Barn Swallows, and Northern Rough-winged Swallows nesting in it.

I guess I was hoping for scoters in the harbor or something, but no such luck.

I have learned two new things during my time here in the U.P.: Pasties are a great, healthy food, and if you turn one of those foam Packers Cheese-head hats upside-down, they double as a drink holder. 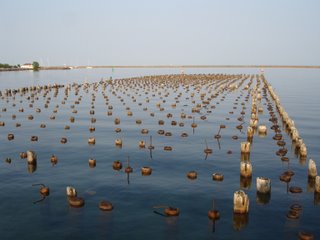 It looks like quite a few birders now have a new species "tick" on their ABA and life lists: Blue Grouse has been split into two separate species.

A nice summary of the recent taxonomical changes made by the AOU can be found at Michael Retter's site: xenospiza.
Posted by Birding is NOT a crime!!!! at 8:01 PM 1 comment:

The America's Birdiest City results are in. Forget about that. Mr. Guppy is still freaky. Forget about that, too. Why? Because the stupidest bird-related plan in the City off Chicago has just begun: The idiotic and possibly illegal border collie gull chase of 2006.

Here is a quote that appears on the Chicago Tribune web site from, apparently, the biggest moron who has ever been hired by the Chicago Park District:

"It's great to see those dogs tear across the beach,"Park District Deputy Director for Natural Resources Ellen Sargent said Wednesday after watching the action on television. The program is costing the city about $6,000, she said.
***
Moron, moron, f*&%ing moron.
Here's another gem from the article:
***
The ace up their sleeve has been Max and his canine colleagues—anticipated to be so disruptive that the Park District promised local birdwatchers they'd refrain from unleashing them until the last northbound migratory birds passed through in late-June.
***
Umm, spring shorebird migration is over, but fall shorebird migration has just begun, which the jackasses who wrote the Tribune article would know if they actually talked to a birder instead of a dog handler or some Park District hack.
More on this when I get back to the UP. But we birders need to keep up the heat on this one.
UPDATE: I sent a strongly-worded e-mail to the Trib last night, and the story is now off the front page of the web site. Probably a coincidence, I'm sure, but at least it's not the lead anymore.
Posted by Birding is NOT a crime!!!! at 9:52 PM 5 comments:

Been in Florida for a few days, will try to update when I can.

Going pretty well so far, Roseate Terns today and Antillean Nighthawks yesterday evening.
Posted by Birding is NOT a crime!!!! at 12:17 AM No comments: