Birders are, by nature, a skeptical lot. We're not just talking about woodpeckers here, but just about any rare or unusual bird is questioned until it is seen well by multiple observers, and even then, records commitees are still not always convinced. That's the way the game is played.

Sometimes, though, this innate skepticism can turn around and bite you on the ass.

Case in point: On Saturday, a Chicago-area birder posted that the thought he saw a Black-headed Gull being fed bread at Chicago's most famous birding spot, Montrose Harbor. It was a pretty decent but cautious description; even though the original observer noted a red bill (a pretty darn unusual characteristic for a winter gull in Chicago!), the first reaction of most birders was probably "C'mon, a Black-Headed Gull? Be serious!" And then, the reaction was silence. Nobody went to check out the bird, or if they did, they didn't say anything about it. (We have an excuse--we were in Germany!) Today, a full four days later, there is a post by another birder confirming the Black-headed Gull. Yikes!

How long has the bird been present? How long will it stay? Nobody knows, but there is one thing we know for certain: there will be a lot of BSDs (Birder Sick Days) today in Chicago.

UPDATE: Photos are here: http://www.chicagobirds.com/photos/thumbnails.php?album=70
Posted by Birding is NOT a crime!!!! at 10:12 AM 3 comments:

Put the Orioles Back Into the Cage!

There have been some very interesting birds reported from a pretty small area in southern Indiana and northern Kentucky recently. Specifically, a Bullock's Oriole, a Scott's Oriole, and finally, an *Audubon's* Oriole. Here are some photos of the Scott's that was found in Kentucky:

People are already starting to grumble a bit about feather wear and a foot infection that the Audubon's supposedly has. So, what do you think? Did this unprecedented Oriole invasion happen naturally, or is someone in New Albany letting their caged birds loose? It seems like a pretty big coincidence, but then again, how many people are keeping Audubon's Orioles in Indiana? (According to ISIS, none, but that obviously only includes "legal" birds.)
Posted by Birding is NOT a crime!!!! at 10:46 PM 6 comments:

Not since Panama has the BINAC crew been hassled by "The Man," but it happened again today, in the good ol' U.S. of A.! You see, after striking out on the Gyrfalcon, the BINACmobile was headed south towards Cheese Land (aka Wisconsin), when, all of a sudden, Smokey makes a U-turn and pulls us over for speeding. Smokey claimed that we were doing 25 mph over the limit, but we think his comment about our Florida (ie out-of-state rental car) license plate reveals the real story behind our detention. BTW, we're pretty sure that radar guns are not that precise from a moving vehicle, but hey, the County gotta eat, right?

In Illinois, members of the General Assembly cannot be arrested or detained on the way to or from a legislative session, and we propose the same rule for birders. If God wanted BINAC to obey the speed limit, he wouldn't have given us a V-8 engine in our rental car! If we wanted to drive slow, we would have rented one of those electric toy cars!

Anyway, as we were discussing the matter with Sheriff Hillbilly, we noticed two adult Bald Eagles overhead, locking their talons in flight! Deputy Doofus was not as interested in this majestic sight as we thought he should be. Probably didn't help our case much.

Here's the thing: Officer Frosty knew we were going to the airport, so he asked us to surrender our driver's license since we were from out-of-state. Fuck that---the last time someone asked us to do that was in, you guessed it, Panama! Anyway, to make a long story short, we had to fork over $150+ cash to bond out and keep our license.

Any locality that makes out-of-towners pay cash up-front is sketchy, at best. In fact, the cash "fine" we paid to Sergeant Goober was $50 more than the cash "bribe" we paid to Officer Panama. No wonder we hate government regulation--there is a very fine line between corruption and government regulation! Guess this means that things are just more expensive in the U.S.!
Posted by Birding is NOT a crime!!!! at 4:49 PM 6 comments:

So, we ran into British Steve at the airport yesterday on our way to the UP. Literally, we ran him over, think we may have broken his leg or something. Steve's co-workers call him "Bird Man", which got us to wondering...how many of you have the same nickname from your co-workers or family???

Anyway, since most of the BINAC crew is out-of-town right now, you know something great would show up in Illinois--how about what may be Illinois' first confirmed Great Grey Owl!!! You heard us right...and not in Chicago or Rockford, but way down south in Southern Illinois, Randolph County to be exact. Apparently a photo has been taken.

Will this stunner bird be re-found? Stay tuned!!!
Posted by Birding is NOT a crime!!!! at 4:41 PM No comments:

Have you spent countless hours at the Ft. Lauderdale cell phone lot? Have you driven up and down Perimeter Road around the airport dozens of times in a single day? Well, we have, numerous times, and it finally paid off: 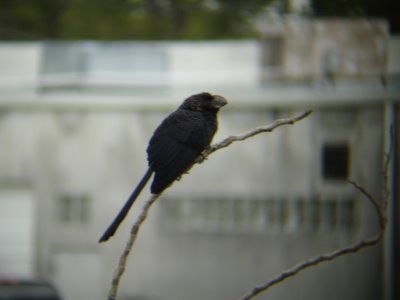 OK, so we know it's just a Smooth-billed Ani, but it's an American-born and raised SB Ani, and that's the key. The bird shown here was part of a group of four Anis seen near the Ft. Lauderdale airport yesterday at about 4:00. While this group of birds is probably not the only family group of SB Anis left in the U.S., it appears to be the only group that is re-findable, at least on an irregular basis.

We dipped on the Western Spindalis, but that particular bird may be around to chase for a while, and they do show up in Florida from time to time anyway.

Regular readers know that our pet peeve is out-of-town birders who travel to other places and don't timely report rare birds they claim to have seen. So it's time to give credit where credit is due: Three cheers to our Hero of the Day:

Michael and his group posted their results from a short trip to Florida on the local listserve, and they the following directions to a slightly new spot for the Anis:

SMOOTH-BILLED ANI - 4 found along Old Griffon Rd near the Ft. Lauderdale Airport. There is a small scrubby "field" along this road where a power line comes through, with huge power poles in it. The anis were in this field, check in the shrubby growth and palms on the corners.

And that's exactly where we found them, right behind a large warehouse just off of Old Griffon (or is it Griffen?) Road.

And now, for something completely different.

You may be wondering what we do here when we're not birding. Well, it's six degrees below in Chicago right now, but it was 80 degrees in Miami today, so guess where we are. 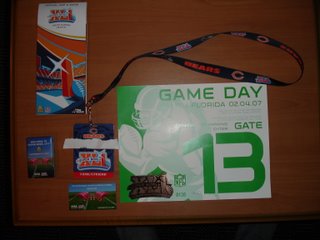 We'll post some pictures from the Bears team hotel later.

Most interesting call of the weekend: a phone call that was interrupted when Matt Hasselback grabbed the phone and started babbling to us.

Most interesting sight: We're pretty sure we weren't having some of drug-induced seizure, but we actually passed by a bar on Ocean Drive and saw what appeared to be Jimmy Buffett playing a few songs with support from Jessica Simpson on the tambourine.
Posted by Birding is NOT a crime!!!! at 12:59 AM No comments: