Now we remember why we hate the Wisconsin Humane Society so much. They support free-roaming feral cat colonies!

And, in a massive stroke of luck, we have finally been able to link the WHS/Mango debacle with the Jim Stevenson trial:

At some point, we envision holding a fundraiser to buy Jim Stevenson a plane ticket to Milwaukee, but that is only a long-range plan.

Since Jim Stevenson has also seen an Ivory-billed Woodpecker, this story is now the Holy Trinity of bird blogging!!!
Posted by Birding is NOT a crime!!!! at 11:03 PM 1 comment:

What the *FUCK* is the Wisconsin Humane Society doing???

OK, now that Jim Stevenson has been freed (through no help from us, we sort of abandoned him, but we'll take credit anyway), the Mango is next on our list.

We were checking out some updated versions of stories on the Mango's birdnapping and found some bizarre quotes from our Moron of the Week, Scott Diehl:

"The Wisconsin Humane Society has rehabilitated baby mockingbirds from Texas and infant ground doves from Florida that ultimately were returned to their home states..."

Where, exactly, did the WHS get an "infant ground dove" from? And baby mockingbirds from "Texas"? What kind of mockingbird would have to be released in Texas? You certainly wouldn't have to release a Northern Mocker that far south. (And please don't fucking tell us Blue Mockingbird, because if the WHS is releasing Blue Mockingbirds in Texas, they have got a lot of 'splaining to do.)

According to some comments floating out there at various places on the 'net (including Sheri Williamson's blog), the WHS has also in the past captured Rufous Hummingbirds.

What the fuck are they doing up there in Wisconsin? Seriously, has the WHS really been capturing multiple vagrants over the past few years? Under what permit were they capturing Rufous Hummingbirds? Because those are clearly protected by the MBTA, right?

Still no response from the Wisconsin DNR.

And no response from the gutless wonders at the Wisconsin Humane Society. They seem to have "lawyered up."
Posted by Birding is NOT a crime!!!! at 10:41 PM 1 comment:

Welcome to the Big House! 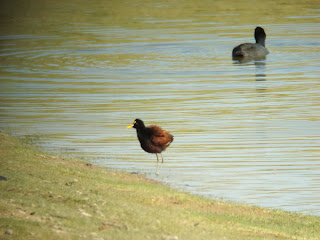 Jim Stevenson has been set free!!!

Jim Stevenson's fate in the hands of the jury!!!

Speaking of being held in captivity...

...apparently Jim Stevenson is on trial right now in Galveston. He might get two years for doing something that isn't even illegal!!!

But, honestly, we're going to see a Jacana tomorrow, so we don't really care!
Posted by Birding is NOT a crime!!!! at 2:03 PM No comments:

Letter to the Wisconsin DNR regarding the Green-breasted Mango

We wish to make an anonymous tip regarding an illegal capture of a migratory wild bird.

Sometime on or before November 7, 2007, representatives of the Wisconsin Humane Society illegally captured a healthy and wild bird, specifically a Green-breasted Mango that had been safely living near Beloit for at least several weeks.

We submit that this capture was performed without the proper federal permit, in violation of the Migratory Bird Treaty Act. Regardless of the position taken by the Humane Society, Green-breasted Mango fits all of the statutory requirements for protection by the MBTA, and is therefore protected by federal law.

The bird has now been transported across states lines to the Brookfield Zoo in Illinois. We also ask that you consult with the Illinois DNR to inform them of this situation.

We trust that you will take your duty to investigate crimes involving wildlife seriously and will investigate this matter promptly. The illegal capture of the Green-breasted Mango should be treated no differently than the taking or poaching of any other wild animal that is prohibited by law. To allow the Society to evade legal liability based on their argument that it was "helping" the bird by capturing it was set a terrible precedent, and could be used by any poacher to justify their actions as being in the "best interests" of wildlife. The DNR has a duty to enforce the law uniformly, and to treat this unlawful capture in the same manner it would treat any other illegal capture of a wild animal.

We are also copying the Illinois DNR to inform them of this potential violation of Wisconsin law, and to inform them that the subject bird has now been transported into Illinois.

The text of the relevant Wisconsin law is as follows:

It is simply amazing that the Wisconsin "Humane" Society is turning the illegal capture of this hummingbird into a media frenzy.

Maybe one of the esteemed journalists present at this circus could have taken the time to ask Scott Diehl under what legal authority he captured the bird?

Because, you see, the precedent has now been set. According the the Wisconsin Humane Society, any healthy bird can now be taken from the wild without a permit as long as it's not on the "approved" list of species that are covered by the MBTA.

We're gonna go find us a Blue Bunting or a Bahama Mockingbird to shoot because according to Scott Diehl, that's not illegal! How about capturing a Roadside Hawk? Anybody want a Fan-Tailed Warbler for a pet? How about your own Thick-Billed Vireo?

We, as birders, cannot let them get away with this. It strikes at the very core of why we bird, and while this might seem harsh with respect to this particular bird, it will *save* more birds in the long run if we respect the MBTA instead of trying to avoid it using a technicality.

Wisconsin Humane Society, are you out there? Do you have a response?

Most importantly, do you have a lawyer?

P.S. If this bird is shipped across state lines to the Brookfield Zoo that could be construed as a RICO violation...
Posted by Birding is NOT a crime!!!! at 12:52 AM 6 comments:

OK, we're bored, so here is an entertaining post from TEXBirds about Jim Stevenson being banned

While people are discussing their attitudes about Texbirds, there'ssomething I'd like to say about a topic that I have been learning somethingabout. It is the matter of Jim Stephenson being banned from Texbirds for'threatening' Susan Schaezler. Maybe other people are scared of either Mr.Sarkozi or Ms. Schaezler, and afraid to speak up, but I think this needs tobe said.

I have spoken to Jim at length, verified his claims, and whilereceiving no pressure to place this on Texbirds from him, when my postoffice box gets invaded by her poison, it's time to speak up. Jim seems tohave adopted a disturbingly ambivalent attitude about this, and says hisassistant posts relevant GOS information. What doesn't get posted, though,is his occasional commentaries on Texas birds.

This whole mess began on what was apparently an otherwise great Alaskantrip, with problems with Susan Schaezler. I don't want to go into that, butshe came away from the trip claiming to have dental work required.Participants tell me there was no cause for this, she brought a tooth repairkit with her, and they feel any dental issues likely preceded the trip. ThatJim had four cracked ribs (as she reported to Texbirds without hispermission), it seems unlikely his driving hit too many bumps, andparticipants certainly deny he did. According to Jim, she wanted to make a claim against their carinsurance in Alaska, but he didn't wish to be complicit in insurance fraud.Upon making that decision, Susan did what she has done before; make personaland professional attacks. Jim pointed this one out to
me:http://www.humanticsfoundation.com/threats.htm

A quick Google of her willreveal a sad past of such attacks. I discovered several attacks she made against Jim on Texbirds, of whichMr. Sarkozi seemed oblivious. Worse, she began sending 'adjusted' clippingsabout him out of newspapers to many people who knew him, often under thealias of "Alex Jones." She is also feeding any dirt she can find on him tothe prosecutor in the infamous cat case we are not supposed to discuss. Butwhen I received a letter from her, that made it my business.

How did she have my address you ask? While Jim was taking Alaskaparticipants on long walks, Susan always stayed behind, and apparently shedownloaded all GOS addresses from his laptop to hers! She hasn't even deniedit! Isn't that illegal??

While her July attacks were going on, Jim called a lady he saw listedon Google named Merl Jeffcoat, who has a positive relationship with Susan.He saw some bird he felt was worth reporting to Texbirds, and mentioned thathe had been talking to her. That was his last Texbird post. Susan claimedto Mr. Sarkozi that Merl was an adversary, which threatened her, and Mr.Sarkozi took Susan's word for it and banned Jim. The truth is, SS and Merlare now FRIENDS, so all this threatening stuff is a lot of crud.

With all the attacks Susan made against Jim, and with how subtly Jimfinally responded, I think David kicked the wrong person off Texbirds.

For myself, I have had enough of Texbirds. Jim's suggestion on a GOSfield trip actually got me on in the first place, and I don't want to be apart of it anymore.

Well, it took a few minutes, but the shit has hit the proverbial fan regarding the capture of the healthy and wild Green-Breasted Mango in Wisconsin. Check out HumNet for the most well-informed discussion you will see on this issue.

We note that the Wisconsin Humane Society has violated state and probably federal law by capturing this hummer. First, the capture likely violates the Migratory Bird Treaty Act. Some people have noted that the GB Mango is "not protected" by the MBTA, but it is the statute -- not the accompanying regulations -- that govern what is or is not protected by the MBTA.

1) The title to all wildlife and their offspring held
under a wildlife rehabilitation license remains under the jurisdiction of the department as described in s. 169.02, Stats., and may not be sold, traded or bartered without the consent of the department.

2) The department may restrict wildlife rehabilitation of specific wildlife species, either statewide or in certain geographic areas to control the spread of disease, to protect public health or to prevent harmful environmental impacts.

(3) The department may restrict wildlife species authorized for rehabilitation based on the facilities and qualifications of the applicant or licensee.

(4) A wildlife rehabilitation license does not authorize the capture, receipt, possession, transportation or transfer of wildlife for any purpose other than wildlife rehabilitation.
***
Part (4) is the important part here. That section means that a person CANNOT capture a bird for any purpose other than wildlife rehabilitation. Since this bird was not sick and not injured, it was not in need of rehabilitation, and could not legally be captured. The statute does not allow someone to capture and hold a healthy bird because they thought that, at some uncertain point in the future, the bird *might* need rehabilitation.
Hummingbirds are not pets, no matter how far out of range they may be. We know that at least some out-of-range hummers return to their "wrong" wintering grounds in consecutive years.
The Wisconsin Humane Society had no legal right to take a healthy bird out of the wild.
The Wisconsin Humane Society should be prosecuted, and we hope that someone brings this matter to the attention of the Wisconsin DNR.
LET OUR MANGO GO!
Posted by Birding is NOT a crime!!!! at 12:11 AM 3 comments:

Who stole our Mango?

***
Subject: mango updateFrom: "Mike Ramsden"
The Beloit Mango has been rescued from the wild and is currently under the
care of a licensed rehabilitator. Reports are that it is eating and doing
well. I suspect that it will be transferred to the Brookfield Zoo in
Chicago when it is able. If I receive any new information I will be sure
and pass it along.
Mike Ramsden
Beloit, Rock County
***
We think a rant is on the way. We're just curious, can anyone send us a copy of the permit under which this Mango was captured?
Posted by Birding is NOT a crime!!!! at 7:08 PM 1 comment: