Coolest plane ever, as seen at IAH.

And not just "cool" because the plane had satellite television onboard.
Check out the tail: 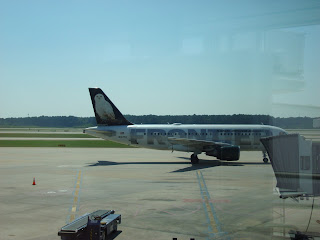 Yeah, that's right: a big-ass Snowy Owl on the tail. 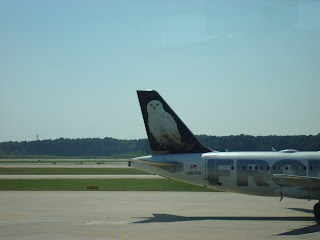 Too bad Frontier can't fly us to Okinawa.

Act quickly to help BINAC save the environment now!!!

We have recently been made aware of a serious threat to the environment that has been caused by birders. Yes, we said *caused* by birders. You see, these silly birders are actually driving in cars to see the Mango that has been hanging out in Beloit. They are thereby using scarce fossil fuels and killing the environment and helping Halliburton and possibly dooming the Eskimo Curlew *and* the Ivory-billed Woodpecker. There is only one way to stop this madness: We must kill the Mango!

It is the *right* thing to do. This Mango is causing thousands of thousands of dollars to be spent on unnecessary things like gasoline and Wisconsin cheese. The earth is warming as we speak, we're in a war on terror, Britney Spears is now fat, and the Mango is the symbol of all that is wrong with America.

OK, we're just killing. (Er, we meant kidding, but we typed killing, which is actually pretty funny. ) Seriously, don't kill the Mango. But there's blood on your hands if you go see it. Everyone who wants to go see the Mango should not go see it and should instead drive to WalMart. We had two urges to see it today, and two trips to the Wall solved that fix pretty quickly. Problem solved.

Kill the Mango or go to Wal-Mart. This enviro-political stuff is easy. We expect to be appointed to a post at the United Nations soon.

Seriously, don't really kill the Mango, you capitalist SUV-driving birding bastards.
Posted by Birding is NOT a crime!!!! at 9:11 PM 2 comments:

According to recent e-mail correspondence, long-time Chicago area birder Jim Landing passed away recently. We have a rule here at BINAC that we do no speak ill of the dead -- a rule that has come into play several times over the past few years.

So we'll just post the message that was sent in its entirety:

***
A Noted and Much Beloved Chicago Birder Has Died
I wish there was a way of broadcasting this news to only those birders who knew, and truly appreciated and cared about Jim Landing, who's now been happily reunited with his beloved dog, Bull. But unfortunately, in order to get the word out to those birders who loved Jim, I must also inform those who maligned him. He died at 9:45 pm on Monday September 3rd, and his remains have been cremated. As per his wishes, there will be no ceremony. Should anybody wish to share personal comments or stories, his son Alan can be contacted at A.Landing@comcast.net
I never would have become half the birder I became, nor seen a quarter of the birds I did, were it not for my association with Jim Landing. But that was only a small part of it. He was also a wonderful friend and companion during the many years we shared. I know he will be sorely missed by many.
I had just walked in the door of my apartment when I received the call from his son Alan at approximately 11 o'clock Monday night. I was in the process of turning on lights, etc., when I noticed that a carved wooden Buddha statue had been knocked over onto its side, which was really strange, I thought as I righted it, as that's never happened before and it's located in a spot where I can't imagine it being disturbed. Then as I turned to open a window it suddenly hit me--That Buddha had been given to me some five or six weeks ago as a gift from Jim!
For as long as I knew him (we met at the bird sanctuary in 1982), that statue had sat on the floor of his apartment to keep a door from swinging shut. I KNEW then that Jim had stopped by to say "hey". "Good for you, Jim," I said aloud, "You found your way home (I told you so!) then you found your way here--Give Bull a pat on the head for me!" Who knows, maybe it was Bull's wagging tail that knocked that statue over. All I'm certain of is that it was no mere accident or coincidence that these events occurred at the same time. Jim never really quite believed in an afterlife. For some time now I'd been telling him, "You'll see. One of these days you'll get there and say, By God, Kosh was right!" I believe that's exactly what happened. He discovered I WAS right, and just stopped by to let me know.
We had good times, Jim. The years I spent with you were some of the best of my life. May you live in Eternal Peace and Happiness, with Bull back at your side. I love you both always.
To Sue, or whoever runs this list--feel free to ban me from IBET. I have absolutely no intention of ever posting another word on it anyway.
Kosh
***
OK, we don't have a rule that shields people who are still alive---wasn't that sort-of a bizarre eulogy/obituary/whatever you wanna call it?
Posted by Birding is NOT a crime!!!! at 11:53 PM 1 comment:

We've been a bit surprised at the (relative) lack of discussion on the IBWO lately, especially in light of some of the bombshell news that has hit over the last few weeks. So we'll break our self-imposed "IBWO embargo" for a few days, and we'll kick things off with a new poll, on the right.
Posted by Birding is NOT a crime!!!! at 3:23 PM 1 comment: