Just messing around practicing some embedding...

Where have all the good birding blogs gone?

It dawned on us that we just recently passed the two-year anniversary of this blog. And while we still don't post as much new material as we should, the fact that we've survived for two years based on gossip, insults, rumor, innuendo, and partial nudity, with an interesting birding tale thrown in now and then, is pretty amazing. It also got us thinking about some of the great birding blogs that gave us the idea to start a blog, and how so many of those blogs have fallen by the wayside. But instead of writing obituaries for those blogs, we're moving forward, and we'll be updating our links to give some newer blogs a bit of exposure.

One good example is the Long Island Birder, also known as Brent B., who has been a long-time reader and contributor here. We may still owe Brent some free Starbucks cards or something from our Mr. Guppy contest. His blog is only like a day old, and it already looks better than ours! So he sucks, but you should still check it out.

Now, both of these blogs might totally suck, you never know, but we think they'll probably both be pretty cool, so at least give them a chance and check them out.

We also stumbled across The Birding Couple, which has been around for some time, but we didn't check them out until lately.

Finally, there's John Mariani's Swampblog from the Great State of Tejas, which has been around longer than we have. You might know John from some of the IBWO stuff he has commented on but his blog covers a lot more ground than that. Not sure why we've never linked to him before, probably just our innate laziness.

And new blog-guys, our advice to you is: 1) Don't be link whores--if you write good shit, people will find it pretty quickly; 2) If you have something to say, say it, and say it *now*-- we have tons of stuff we wanted to talk about but just got lazy and those ideas sort of drifted away; and 3) This is related to #2, but is important enough for its own number: the best way to build and keep readers is to make sure that you post regularly. Don't worry about feedback or links or whatever...just keep posting every day or at least every week and things will start to happen.
Posted by Birding is NOT a crime!!!! at 12:54 PM 2 comments:

Probably not, but hey, any time we can accuse Ralph Lauren of killing something, we're entertained.

July 12, 2007 -- Is Ralph Lauren to blame for the disappearance of three piping plover families?
The federally protected birds - in danger of extinction because they insist on building their nests on busy beaches - went missing last month after cosmetics giant L'Oréal choppered 18 fashion editors to the Hamptons to launch its Ralph Lauren men's cologne and entertained them with rides along the surf in a fleet of Land Rovers.
While East Hampton canceled its July Fourth fireworks for the second year in a row so the plovers wouldn't be disturbed, L'Oréal put up a tent at the end of Napeague Lane in Amagansett. As the pampered fashionistas sipped champagne, devoured lobster and took joy rides in the four-wheelers, the gentle plovers were freaking out, according to Latisha Coy, a staffer with the town's Natural Resources Dept.
Coy told the East Hampton Star that, during the event, she witnessed one stressed-out plover hovering over Lauren's tent, which she claimed was improperly covering an area where the birds find nesting material. "There were eight Land Rovers east and west, shooting past . . . We were shocked and stepped in front of the vehicles to try to stop them." she said. "They were spitting up sand when they were turning around."
Coy, who claims the vehicles were speeding at more than 30 mph, said she spotted six pairs of plovers on the day of the event, but only three pairs the next day.
Francis Bock, clerk of the East Hampton Town Trustees, told the paper he's seeking subpoenas to quiz witnesses and wants the Fish & Wildlife Service to consider hitting L'Oréal with a fine of up to $200,000.
Serge Jureidini, president of L'Oréal USA's designer fragrance division, told us, "We abided by all regulations and permits. We absolutely did not harass the birds."
Fish & Wildlife rep Terri Edwards said her agency is "aware of the situation, but by policy we cannot confirm or deny the existence of a criminal investigation."
Not everybody loves the plovers. Advertising legend Jerry Della Femina said, "East Hampton is the only place in the country that can't celebrate the Fourth of July because of these dumb little birds. It would be just as easy to pick them up and move them to another part of the beach."
Posted by Birding is NOT a crime!!!! at 12:25 PM 1 comment:

Not sure how we missed this, but apparently there was a decapitated Night Parrot found in Australia last year but the find was not publicized for several months. Too late for any competent birders to do a thorough follow-up. Maybe Cornell was heading that search, too?
http://www.brisbanetimes.com.au/news/national/twitchers-cry-foul-in-case-of-the-deceased-parrot/2007/06/22/1182019367467.html?page=fullpage#contentSwap1
Posted by Birding is NOT a crime!!!! at 8:56 PM 1 comment:

Must have been a slow news day...

...check out this story from the Chicago Tribune. Apparently Mayor Daley is doing such a great jon getting rid of our breeding birds the a nesting Red-winged Blackbird is big news. I hope the folks at the Shedd know more about fish than theyknow about birds. Hey, maybe the City can pay Wild Goose Chase, Inc. $45,ooo to train dogs to chase blackbirds away!

***
Dive-bombing bird targets Shedd
Tribune staff report
Published July 6, 2007, 10:18 AM CDT
A redwing blackbird is conducting dive-bombing runs near the Shedd Aquarium, but officials there insist there is no danger to the public.Museum officials say the bird likely is doing just what nature intended: defending a nest with hatchlings, according to WGN-Ch. 9 and CLTV.
Fortunately for the public, "it is in a low-traffic area," said Shedd spokesman Roger Germann. "There's no threat to the general public—it's off to one side."But the territory the bird has claimed is directly over a door used by staffers for special events. But, "we don't usually use that door," Germann said.
Employees have noticed the bird over the last couple of weeks, as migratory birds make their way through Chicago."It should be gone pretty soon when the fledglings start flying and continue their migration," Germann said.There have been no injuries.
Posted by Birding is NOT a crime!!!! at 4:11 PM No comments:

Brown-chested Martin in in Illinois

Oh yeah, we almost forget, but we even heard about it in Norway...there was a Brown-chested Martin seen in Illinois recently by a reliable observer, but it was not re-found.
Posted by Birding is NOT a crime!!!! at 9:45 AM No comments:

With apologies to Corey Hart...

...we do wear our sunglasses at night. At least, when we're north of the Arctic Circle in summer we do. We're a bit wired after a fantastic but grueling 12-hour drive from the North Cape. It's one o'clock in the morning, but with the jets taking off at the nearby airport, the constant chatter of those *&*%$! magpies, and the fact that it's bright and sunny out, we will take this opportunity to blog instead of sleep.
Posted by Birding is NOT a crime!!!! at 5:53 PM No comments:

Peace and Solitude at the North Cape

We have always wanted to visit the North Cape -- or Nordkappe, as the t-shirts say -- to see the northernmost point in mainland Europe. The brochures and guide books describe it as a remote and desolate place of great beauty. The beauty of the Cape and surrounding areas is undeniable: 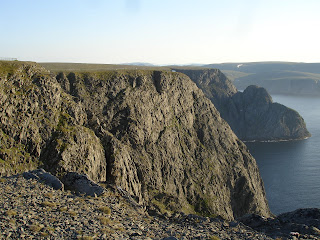 And there is some great history here, too, as some of the most important naval battles of WWII took place in the waters off of the Cape. There is also a bar, a chapel, and the iconic sculpture that graces thousands of postcards and coffee mugs: 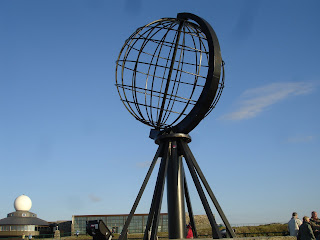 Of course, the brochures are a *bit* misleading. The Cape isn't really the northernmost point in mainland Europe. Hell, it's not even in mainland Europe, it's on an island. And even if it weren't on an island, the big cliff next door (pictured above) is really further north. And about that peace and solitude. We wanted to see the Midnight Sun at the North Cape to ring in the 4th of July BINAC-style. A few other people apparently had the same idea. We were worried when the lobby got a bit crowded: 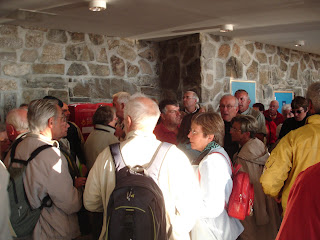 And we were told there would be some campers, but we were thinking a couple of tents, not something like this: 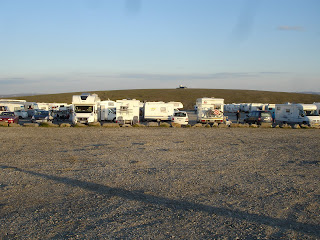 And the tour buses nearly pushed us over the edge: 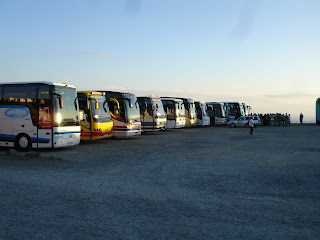 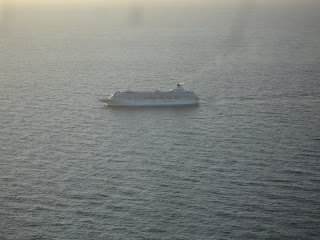 (OK, that's not the QE2, it's a different cruise ship, but the QE2 was actually there a bit earlier in the day. Really.)
Peace and solitude? Sure, with several thousand of your closest friends! We decided to split and enjoy the Midnight Sun our way--with a little birding.
We didn't see much, but at the stroke of midnight, we had our own view of the North Cape and the Midnight Sun from a distance, and we had it all to ourselves. (With the exception of one Finnish guy in a tent, but we'll just forget about him.) 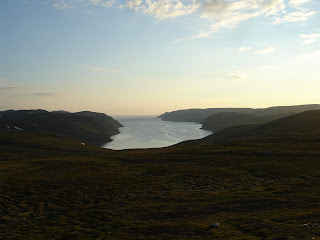